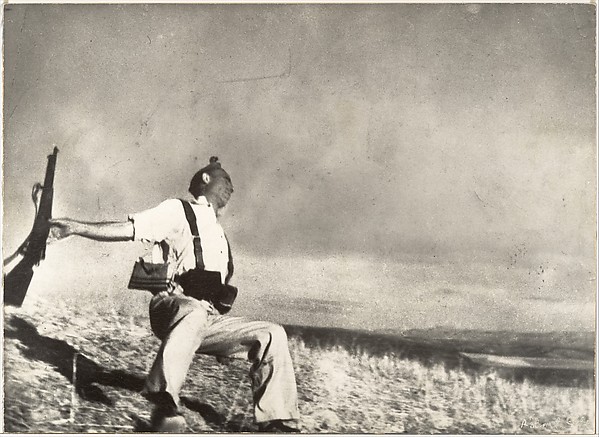 (A 2013 investigative documentary broadcast by Japan’s NHK reported research carried out by Kotaro Sawaki claiming that Gerda Taro should be acknowledged as the real photographer. The photo was published shortly after her death – from Wikipedia. Note: as many theories abound about this photo as “Did USA really land on the moon?” Is the photo staged, where was it taken, who took it?)

As you know the club has a print and video slideshow exhibition at the Quarry Theatre right now. They are also sharing the space with a BAFTA print exhibition of photographs taken from the Bugsy Malone film production showing at the Bedford Film Festival this weekend. Whilst not quite up to the scale and quality of the BAFTA portrait exhibition earlier this year it is still worthwhile calling in if you are passing as I am sure all of us would have been very pleased to have taken any of these shots.

Now onto a professional, touring production showing for one day only this week, Shooting With Light. It is about the true story of the female war photographer Gerda Taro who partnered Robert Capa.

If you haven’t read it I would recommend Capa’s “autobiography” Slightly Out of Focus.

Anyway, below is a copy of Jules email…

We have a great play on next week which might interest some of your members as it’s about photo-journalists Robert Capa (who went on to become famous) and Gerda Taro (who died photographing the Spanish Civil War).  It’s called Shooting With Light

Shooting With Light by Idle Motion. The Quarry Theatre Thursday 22 September @ 7.30pm. Tickets £12/£10 on linewww.quarrytheatre.org.uk or on the door

Since the invention of photography we have collectively taken over 3.5 trillion photographs. Total Theatre Award nominated Idle Motion search within these snapshots to expose one of the most remarkable untold stories of our age. It’s 1933 and a young German refugee flees to Paris, reinventing herself as Gerda Taro. Discovering the wonder of photography, she falls in love with a fellow refugee who teaches her, ‘if your pictures aren’t good enough, you aren’t close enough’. Together they venture to the Spanish Civil War and capture the tyranny of fascism. As pioneers of frontline photo journalism, he would go on to receive international recognition as the iconic war photographer Robert Capa – she would be forgotten. Using innovative staging, physicality and multimedia, internationally renowned company Idle Motion piece together the life of an exceptional woman, glimpsed through the lost photographs she risked her life to take. “Such an engaging and inventive young company […] this show is as heartfelt and passionate as Taro herself.” LYN GARDNER, THE GUARDIAN (4 STARS)

A good opportunity to see an interesting play at the Quarry Theatre www.quarrytheatre.org.uk/